Hi there! This post is part of a series I am doing where I attempt to move most of the applications I use at home over to Linux. If you find this interesting you may enjoy the other posts too!

Today I will be covering getting up and running with Node-RED on your server. This process is slightly more involved compared to all the previous instals we have done so far, however this post aims to make it as simple as possible!

In order to run Node-RED you will need to have Node.js installed, these steps are a condensed version of the official installation guide for Ubuntu.

To install Node.js 12.x simply run the below command on your server:

Once complete you can install Node.js using the following command:

You can run the below command to verify that the installation succeeded:

You should see output similar to the below:

Once we have Node.js installed we can move on to installing Node-RED, the below commands are taken from the official documentation.

Note: you will need to run most of these commands as sudo

You can install Node-RED with the below command:

Once installed, you can test that everything is working by launching Node-RED with it’s default settings:

If you are planning on making your Node-RED installation accessible on your home network (or the web) it is a good idea to secure it with a password, follow the steps below to add the default admin user and custom password to your instance.

First you will need to install the node-red-admin package.

Once installed run the below command making sure to follow the prompts to generate your password hash:

Once you have the hashed password we will need to edit Node-RED’s settings.js file and enable the admin user account, you can edit the file with the following command:

Find the Securing Node-RED section (shown below) and un-comment the adminAuth section making sure that you replace the default password with the hash generated above.

Next, save and close the configuration file and restart Node-RED (for now you can just run it from the terminal via the node-red command). Once started head over to the Web UI and you should be presented with a login dialog similar to this:

Ideally we want Node-RED to start when the server boots, after some digging online the below process worked best for me (more information here). Basically we are going to install pm2 which is a process manager plugin for Node.js and can be configured to start services on boot.

You can install pm2 using the following command:

Once installed you will need to get the path to the node-red executable using the which command:

In my case I am using the default Node-RED binary (/usr/bin/node-red).

You can test that everything is working as expected by running the below command (making sure to use the path to your node-red binary):

This should start Node-RED in the background, you can view information about the process and access the log output using the commands:

You can configure Node-RED to start on boot by running the below commands, you will need to have pm2 installed (covered above):

The last command will output another command that you will need to run in order to configure Node-RED to start up on server reboot, in my case the following output was generated (Note the output may vary for your setup).

After running the generated command on my server I got confirmation that Node-RED was configured to start on boot:

The only thing left to do now, is to restart the server and see if Node-RED starts by itself, and in my case it did! 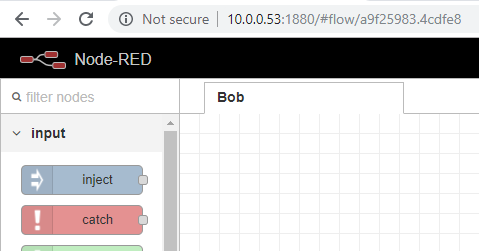 Presumably you installed Node-RED using your user account (as root is disabled by default on Ubuntu), so you will need to amend some permissions before you can install any additional pallets to Node-RED.

After some digging on Google I came across this post which had an all-in-one command that fixed my permissions perfectly, maybe this will save you some time!

Navigate to your Node-RED folder (in my case it was /home/niemandr/.node-red) and run this command to fix permissions:

NOTE: you need to be in your Node-RED directory before running this command!

Once you have fixed the permissions (covered above) you should be able to install any palettes normally through Node-RED. 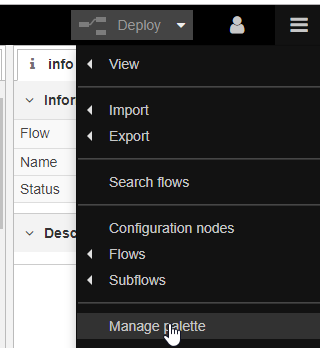 Thanks to the fix above I was able to install all the palettes I needed with no permission errors.

As a bonus I thought I would cover creating automated backups of your Node-RED server using a CRON job.

I would like to backup this file along with the settings.js file daily. The easiest way I could think of doing this was to make use of the zip command which we will need to first install using:

We can simply zip any files matching the *.json pattern in your Node-RED configuration folder (in my case that was /home/niemandr/.node-red) using the below command:

This will create a zip file with the following naming convention: Node-RED-<DATE>.zip:

You can manage your CRON jobs using the below command:

If this is the first time working with users’ CRON jobs you will be prompted to create a new file, if this is the case just use the suggested defaults.

Add the below line to your CRON file (making changes where required):

You can use this site to help generate a suitable CRON schedule expression, as you can see I have configured mine to run every day at 8:50 pm:

Once done, save and close the CRON file.

You are now configured with daily backups of your Node-RED service!

This was a longer post than normal, and I would like to thank you for sticking it out to the end! I always welcome any comments, suggestions and feedback on these posts as it helps me learn.

If you are stuck feel free to ask me a question and I will do my best to answer you ASAP.

Over the top Door Monitoring (RF, Node-RED and HASS)

I work out of the basement at home and often don’t hear when my wife gets back from work or my daughter gets back from school. I wanted a way to be notified when either the front door (or back door...

Backing up MariaDB (MySQL) via CRON